Why you shouldn’t play with fire… 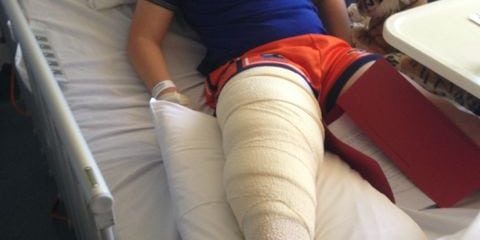 *Warning some of these photos are graphic!*

Imagine this; it’s 9pm and I’m sitting on the couch at Bushbabe‘s house and the phone rings. We both look at each other wondering. After all it’s reasonably late for a phone call!

There is nothing surer than those words to straight panic into the heart of a mother! Hayden day 1 after being burnt

It turned out that Hayden was on his way to hospital after getting burnt.

Luckily I was heading home the next day because later that night I got a text telling me he was going to be staying in hospital and the Esperance doctors weren’t sure if he would have to go to Perth to have a skin graft or not.

I can tell you I was pretty pleased to walk in through the hospital door and hug my boy. It’s the white patch which was the concern

The nurses told me it was the white patch they were concerned about and because it was on the knee, scarring could cause problems with the movement later on, which was why they were sending photos to the burns unit at Princess Margaret Hospital. If they wanted us to come to Perth they would let us know.

That greeny, mushy coloured stuff on his leg is called ‘Sluff’ – it’s all the dead skin from the burn. The farmer in me made me tell the staff it looked like a fly blown sheep without the maggots. Probably no surprise they gave me a few strange looks! Considering how awful it looked, Hayden didn’t seem to be in huge amounts of pain, unless he moved. There were a few days of games, stories and computer games before they told us we could go home.

I almost shouted with joy – I’d been back in Esperance three days and spent hardly anytime at the house at all – all at the hospital. There was so much to do – catch up on all the mail from while I’d been away on tour, washing, starting to write my next book… You get the picture.

Once we left the Esperance hospital and headed home, I assumed Perth was out of the question. I was wrong.

After a dressing change at Ambulatory Care and another lot of photos sent up to PMH, I had a phone call saying they needed me in Perth that night.

I almost laughed out loud. I had three hours to get organised, a child that needed someone to look after them in Esperance, a go that need a place to stay… Three hours??

‘And how long will I be away for?’ I asked, my mind grappling with the news.

I can’t remember what I said to that, but I’m pretty sure it wasn’t complimentary! In the end I managed to put off going for twenty four hours so I had time to organise a few things – it wasn’t going to hurt Hayden by doing that and it was certainly going to make slightly easier. Rochelle was thrilled to find out she was having a few days off school and with the thought of a bit of shopping in Perth, she was happy to come along for the ride! 

Having arrived on Sunday night, Hayden was operated on first thing on Monday morning. (As most mum’s will know, there is nothing worse than seeing your child slip into a general anaesthetic. Coming out of it, however, can be a little funny. Hayden felt so weird, he kept saying:

‘I’m loosing my mind. My name is Hayden. I’m at Princess Margaret Hospital, I was born on…’ so on an so forth. Rochelle was standing at the end of his bed with her iPod. I banned any thoughts of her videoing him… I had visions on her popping something up on Facebook or saving it for Hayden’s twenty first. After all aren’t sisters supposed to do embarrassing things to their brothers?

The physio visited a couple of days afterwards, but with a bandage this size and heavy, Hayden found it really hard to move his leg. It took a few days, but they eventually got him up and moving. I was lucky enough to have Garry to come up later in the week to give me a bit of support. He whipped me off to Fremantle Markets for a day of ‘something different’. The atmosphere was amazingly vibrant and fun and the food was incredible! The break was necessary! Eight weeks on, and even though it still looks like this, it’s heeling really well. (I never thought I would say that something quite so horrible looking, is looking good!)

He has a ‘second skin’ which he will have to wear for two years and if he stays off the flying fox and stops stacking it on his bike, the burn may have a chance to heal! (The skin is so fragile, it’s just like rice paper, so it doesn’t take much to bust it open. Which Hayden does sometimes, by just ‘being a boy’!)

The lesson here is, let’s not play with fire!

*Thanks to all the nurses at the Esperance Hospital and Ambulatory Care and all the staff at PMH.