What the mail brings in… 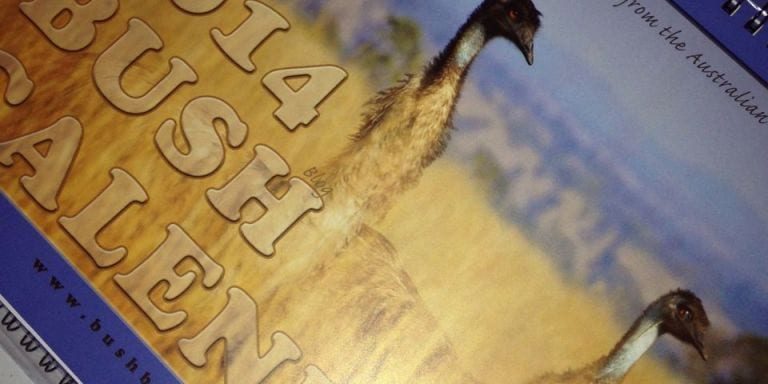 Okay, I admit it. I love going to the mail box. Not because I like picking up the bills – who does? But because I’m a sucker for letters and presents in the mail.

Oh and by the way, why wouldn’t you want to visit THIS mail box? I’ve had people suggest they would like to live in it! There was even a note left in it after the Easter break, saying they’d pay $1/wk for it!

I made my way down the driveway to collect the mail on Monday. When I opened the door, there were three – not one or two, but THREE huge parcels.

See? This is why I love collecting the mail – never know what is going to be in there.

The first one I fell on , because I realised they were from my mate, all the way from Queensland, BushBabeofOz. It was the calendars I’m going to be giving away to the first eight orders of my Christmas pack. (Don’t worry, you haven’t missed it yet, I’m still getting organised!) With a gorgeous front cover like this, I can’t wait for January 1 2014 to come so I can hand it on my wall!

Looking through treasure stack, I came across another pressie: Taken by BushBabeofOz in Brisbane earlier this year, I’m thrilled to have a keepsake of the fantastic panel I did, with Pip Courtney, Alice Greenup and Nicole Alexander.

After this, I turned my attention to the next box – I knew it was a book, but I also remembered I hadn’t ordered anything…

It was from my publicist and I gotta admit, I was pretty happy when I saw the cover! Karly Lane’s new offering Poppy’s Dilemma.  You can read all about it here. Now, it won’t hit the shelves until the end of November, but wouldn’t it make a fantastic Christmas present for lovers of Rural Lit? The third one? Well, it’s a new flatpack desk I ordered a while ago. It’s going to go in our new house and it’s where I’ll sit when I start writing Indigo Storm.

Talk about excitement plus! What was in your mail box this week?