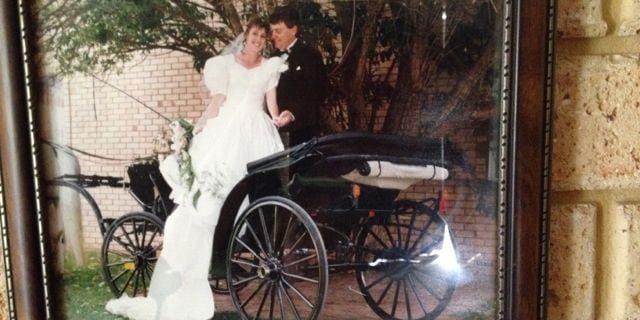 Special events always have to be fitted in around the main jobs in farming.

We jokingly said our kids had to be born in between the heifers starting to calve and lamb marking – that way, I was available to help at both times and The boss was able to help me out, if things got a bit too hard, with the babies. However, joking aside, that was the exact time they arrived.

One was born on the 1st of March and the other on the 28th March – thirteen months apart! (We also joke, that females have to be fertile on farms otherwise they get culled, so I did my best. It might just be luck over the last few years, I haven’t been culled due to lack of production!)

So when it came to our wedding, the same formula was applied. It couldn’t be held in October, November or December because of hay making and harvest. February was out because it was likely we’d be feeding the stock by then and that’s an ongoing job, until it rains. April was out because the heifers were calving and so on and so forth.

Let me assure you, this isn’t weird, this is just farming!

In the end there was only January.

Tomorrow, it’s our 18th anniversary and still memories of that day are so clear. Possibly because it was 46 degrees. I remember seeing the temperature flashed up on a billboard as we drove down Anzac Highway, in Adelaide, towards the Church.

That morning I woke at a bout 4am and was excited I couldn’t go back to sleep. Of the obvious course of action, is to ring all your friends and wake them up. Some were rather disgruntled with me! I remember mum racing out to Harris Scarfs the morning of, to stock up on fans, because it was so hot – we didn’t want any of the oldies keeling over in aisles!

I can remember slugging water out of two litre bottles (most unlady like, my Papa told me) and swinging the skirts of my dress up and down to get some air movement happening (even more unlady like, apparently!).

The Boss’s gorgeous rose, in his buttonhole, was bitten off by the horse, as we were posing for photos in front of the carriage I arrived in, and after we left the reception, my new uncle-in-law threw a punch at our best man. (Can’t chose your new rellies, unfortunately.)

Two days before the wedding, my nana broke her hip, so we also made a stop off at the hospital to see her.

We left to head home, the day after we were married, because as my dad handed me over to my soon-to-be husband, The Boss whispered to me: ‘We bought the farm!’ It’s reasonably hard to concentrate on the wedding ceremony when you’re greeted with that type of news as your husband is lifting off your veil!

It was a crazy, perfect and less-than-perfect!

Our honeymoon was (as we’d driven all night) watching the sun come up over The Head of the Bite on the Nullarbor – The Boss woke me up to see it, and I grunted.

The drive back, non-stop, took about twenty hours. Needless to say, it was a rather full on, emotional day.

What are your memories from your wedding day?