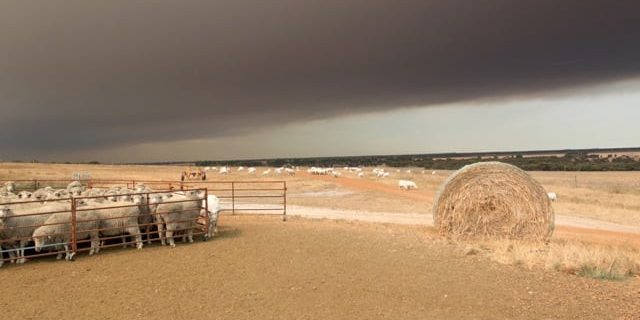 What a week of weather! I know if often seems as if farmers are always complaining about weather and that’s a fair comment, but so much relies on it!

On Thursday last week, it was fairly bloody hot and humid after a thunderstorm the previous couple of days. I was drenching sheep and the shearers were going as fast as they could to beat the next lot of thundery weather. Keeping my eyes on the sky, I slowly worked my way through the most uncooperative mob of ewes, I think we have ever owned.

Without warning the blue disappeared and was replaced with an ominous looking cloud. A sniff on the wind revealed what I thought it was. Smoke!

A fire is something we farmers dread on hot, gusty days. I quickly got on the phone to The Boss, who is also a fire control officer and was told it was north of us, out in the bush. Not something we had to worry about. smoking coming in over Mount Howick

I have to say, I was relieved, because as you can see, there was a fair bit of of smoke around.

It made for a pretty sunset, mind you! After all the thunderstorms had gone through, we had a few days of pretty hot weather. Then on the weekend, we were hit with a deluge of rain – over 30mm! Really bad news for harvest, but okay news for the dams and water storage. Gotta find a silver lining in everything Mother Nature throws at us!