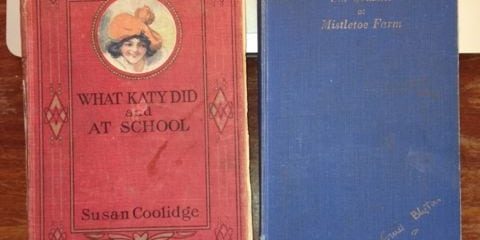 I’m not a material person. Neither is my husband. In fact my mother-in-law used to joke we’d be happy sleeping under a barb wire fence and a broken one at that, just so long as we were happy and healthy. But I do have two possessions which are treasured.

I think anyone who reads my blog will know I was (and still am) a HUGE Enid Blyton fan. So much so, I still love reading the Famous Five books. I’ve managed to pass that love on to my son, who is always listening to audio books of the series, on his iPod. (Amazing to think that books from so long ago are still entertaining kids these days and in different ways to just reading them).

When I was a kid, I used to visit my Nana and Papa’s station. In their garage was a big trunk. The sort I used to imagine that the Famous Five used to take away to boarding school – tin, had the arched lift up lid and my mother’s name was embossed in gold, on the top.

Inside this trunk was books. Old books that both my grandparents and mum used to read when they were kids.

Each visit (which was almost weekly) I was allowed to open that squeaky lid and delve in to find a book I might like to read. It was like a mystical land and I can still remember entering the darkened garage and getting goosebumps on my arms. That may sound like an over reaction, but I’ve always had a good imagination! Sometimes I felt like I was in the middle of a mystery the Hardy Boys were solving, or that I was George, from the Famous Five and I might find something that equated to a secret or puzzle that needed me to solve it. (I’m not the only one to do this – my Mum used to act out Robbery Under Arms on her horse!)

I was lucky to be able to do this, because I was exposed to all sorts of books I would have never read. I understood ‘olden days’ much better than many other kids, because I’d spent so much time reading about it – ‘olden days’ was when these books were written!

Anyway, these two books that are pictured here are my absolute treasures. They’ve gone everywhere with me, since I left home. Every farm I’ve worked on, every shift I’ve made, they’ve almost been the first thing to go into the boxes, when I start to pack.

The ‘Katy’ book is falling apart – I must get it repaired somehow, but Six Cousins at Mistletoe Farm is still as robust as when it was given to my Mum for her tenth birthday. And ‘What Katy did and At School’ is even more special because it belonged to my grandmother. And although all the books show that they’ve been passed down through many hands (as you can see from  the scribbles!) that just adds to character and specialness.

It’s not just about the books and who they belonged to, though. It’s about keeping history alive in a time that is instant and throw away-able.

Do you have something that you take everywhere with you?