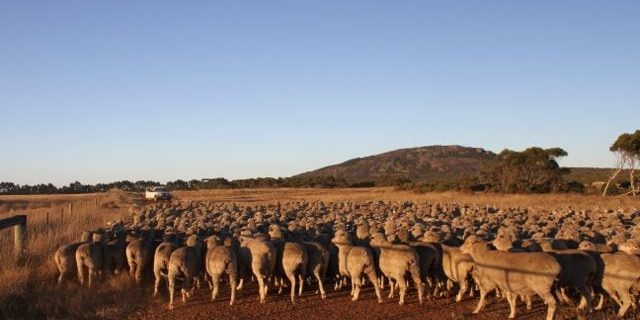 Getting out of bed at 4am is not hard, when I can walk outside, sipping coffee and see this view.

There wasn’t long to admire the sunrise, though, as we had 700 ewes to walk ‘up the road’. A cool ten kilometres. We’d shifted another 700 the previous day. 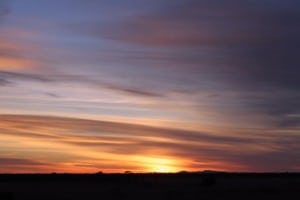 Knowing it was going to be a hot day – over 35 degrees – we had to get a move on. We couldn’t afford to get half way and the sheep tire, or it get too hot for them to walk, because we were shifting them on a public road. 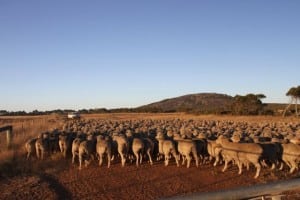 By 4:30am, we were assembled at our back gate and ready to go. 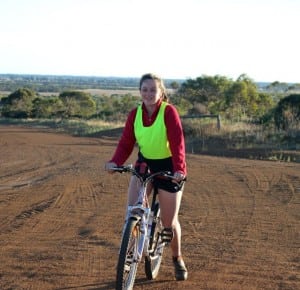 We all had our instructions and the kids were dropped at certain points along the route, to stop the sheep from going into driveways and other onto other farms. 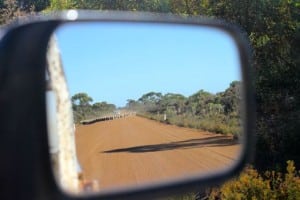 Once on the road, I played ‘lead dog’, slowing down the quicker ones in the mob and going ahead to shut the gates. If any cars or trucks came along, I stopped them and asked if they wouldn’t mind just waiting until we went by (thanks to the two blokes in HUGE boom sprays, who happily pulled over and let us pass!)

In ‘the olden days’ (as my kids would say) my job would have been done on horse back and this would have been classed as droving. I guess we were “droving” in the sense of the word, but we were heading to a farm where we agist stock and were there within hours, not days, as it would have taken earlier generations.

(In some parts of Australia, they still use horse to do this, but we don’t own any horses… Much to my disgust!)

No time for editing or planning books, doing this job. Concentration is needed the whole way.

Now how long do you think it would take to walk a mob of sheep ten kilometres? Five, six hours? Nup. These girls powered down the road and we were back home having bacon and egg sandwiches by 8am!

What did you do on Christmas Eve Day?