The one pizza night I’ve always wanted to be at… 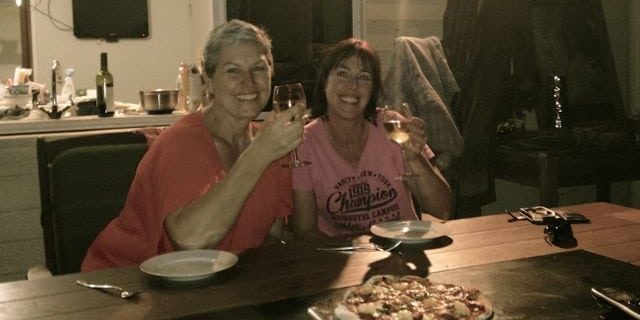 To coin a phrase, but slightly twist it, from Amanda over at Bush Babe of Oz (BB): ‘It’s no secret I’m a Bush Babe of Oz fan.’ In fact I think Amanda and I have a mutual admiration party going on!

Not sure how long ago it was now, that we met online – I was attracted to her photography and (being the cheeky type of person I am) contacted her to ask if she could give me some photography tips, which she duly it. She’s also reviewed every one of books, since then.

Our friendship has grown from there and, despite all of the things she’s been going through in the last twelve months (Chemo, sending kids to boarding school, battling dry times, then cyclones, so on and so forth) she has always, ALWAYS been on the end of the phone for me.

We are also involved with a Facebook page called Outback Paparazzi, which was BB’s brain child, with another incredible lady, Ann Britton. Sugar Cane crops from the air

So when I knew I was going to be in Brisbane (even though it’s a six hour – I think – drive to her place) I was too close not to go and visit.

You can tell I’m from the country with that last statement.

So I packed a water bottle and cut lunch, in case I got lost, boarded a plane to Bundaburg. That was the easy bit! And the other easy bit was getting entrenched in the scenery. Check out all that sugar cane and how the paddocks join together to look like a patchwork quilt. On the road again

Once I disembarked and found my hire car, the challenge was to get through Bundy and weave my way through some magnificent country, all the while having no idea where I was actually going or in what direction. During an interesting moment while I was a cross road I had a phone call and I told my friend: ‘If I can get to Amanda’s I think I can get anywhere!’

Karen, my GPS navigator, decided to add some fun into the mix by sending me on a route that was completely different to what BB had given me. Stories I’d heard from friends whose kids had been sent down back tracks and dead end roads, while following instructions from ‘Karen’ came flooding back and I became very nervous. Even more so after I remembered a story from BB about her great friend, TJ, who didn’t wait at the allotted meeting point and managed to get lost in the never-never. I might add I’m a bit more cautious than that!

After a phone call to check on the directions, I gritted my teeth and headed out into the wilderness… I certainly knew where I was

… And managed to arrive safely.

Sitting on the famous deck, I was always going to know, even if I did have a few glasses of wine, where I was.

It was awesome to meet ‘everyone’ in person. There was obviously the humans to be reacquainted with; Miss Violet (who is a beautiful cheeky miss!), Mr I (who is as Incredible as his name suggests), the neighbours, Uncle Tex and Bron (lovely to meet them in person instead of reading about them.)

Then there was Axel, the Great Dane who is seriously as tall as me… Middy the cat, who seemed to like my company while we sat in contemplative silence, in the sun. Or maybe it was just the sun she was after. …The girls (and boys who aren’t featured here), some who were going to grace Beef Week with their impressive presence… Charbrays – we loved the refection here

… And the Charbray’s from next door, who were basking in their own reflections in the river! Let me tell you, this lot are posers, there was no doubt about it! Then there were these dirt roads and sun rays which made me quite at home. Everything was made from wood

Everything like cattle yards and fence posts were made from timber… Man from Snowy River Country… except much warmer

When you look at the country, it’s not hard to see why. There’s a fair bit of  it around. To me, some of the country – the parts with high ridges and deep gully’s are just like the mountain country where the Man from Snowy River was filmed… Except it’s a lot warmer! Mr I cooking up a storm

So after our drive around, (talking all the time, or least if we weren’t talking we were taking photos  – we can multi-task like that, us women!) it was Mr I’s job to cook up dinner, while we sat back and… Yup, talked some more. And snapped a few snaps.

Now let me tell you, these pizza nights at Granite Glen are legendary. I’ve heard all about them over Facebook and I’ve always wanted to be at one! Finally, here I was, being spoilt by BB and her Mr I. I really should have had to shake myself… While the girls relaxed

… I would have, if I’d remembered to, but I was too busy talking… Although we had to take a break, we while had a sleep, but we started talking again, fairly early the next morning, while Miss Violet was decorating her very special cakes for the local show. (I’ll also have you know that food talent runs in the family as Violet took out, from memory, two first prizes! Even after ignoring a couple of the rules for the large cake category!)

I say talent because after I was well and truly stuffed with Pizza and the offer of a cooked breakie in the morning, BB just whipped this beautiful pasta dish in about three seconds flat and then poured me a glass of wine and we gravitated to the deck to eat. And talk.

It was on one the best, most relaxing thirty six hours I have had in a long time. Thanks for you hospitality my lovely friend. xx