That moment when your heart skips a beat… 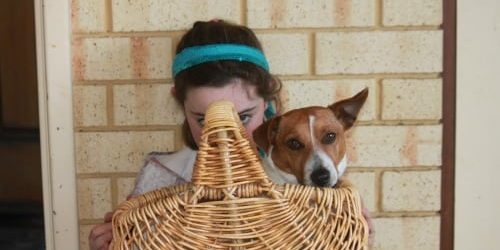 Every so often things go slightly crazy around here.

I’ve written a few blogs about when it happens. One is here and another one, here. They always seem to involve snakes, frogs, chooks, kids and the Jack Russell.

Today was one of moments.

Teenagers seem to like their music up loud. We have a new car and it has a pretty impressive sound system in it. Daughter number one was cleaning the car. The music was very loud.

I was folding clothes in the spare room and saw the glimpse of a Jack Russell fly by the window. He shouldn’t have been outside.

It’s the perfect day for snakes. Warm, humid and I’d said today was NOT the day to have the Jack Russell outside unless he was on the lead, preferably with a human holding the other end.

I made my way to the laundry door (that’s where the extension lead runs out so the car can be vacuumed.) I found this door open. About ten centimetres open. Enough for a Jack Russell to worm his way outside, of his own accord and enough for a snake to come into the house, it if felt that way inclined. (As I’ve seen dugite snake coming out of a crevice in the wall right next to that door, I always insist it’s shut. In fact because we live in a snake pit, every single door has to be shut every second of the day. You have one moment to get through the doors in our house before I start yelling “shut the door!’.)

Muttering soothing about kids and not shutting doors, I walked out to give daughter number one a mouthful… and promptly saw a snake.

Froze. There was nothing else to do. Yelled at daughter. She didn’t hear. One Direction was warbling something about the ‘best song ever’, which wasn’t a suitable sound track to what we were about to experience. In desperation I banged on the bonnet of the car and thankfully she heard me.

She still didn’t hear, but finally killed the music and promptly got out of the car.

She heard me this time, looked down and realised she was about to step on it, the same time as the Jack Russell came SCREAMING around the corner, barking it’s little head off. That bloody dog just have to be involved in EVERYTHING!

I can’t tell you what went through my head, but I think I re-wrote the dictionary when it came to swear words.

I managed to grab the dog by the tail and yank him back as he came within a foot of the snake. At the same time daughter screamed and scrambled back into the car. I threw the dog at her and told her to stay put.

By this stage son number one, who had been out spraying the weeds, came around the corner shovel in hand (I’d been yelling for one) and the work dog, Weasel, came to see what the carry on was all about. The snake, much to it’s credit was just lying there, watching everything that was going on. Being only in thongs, I told Number One Son to get me some boots. The snake had had enough and it took off in between the car, Weasel (who took a step towards it, wanting to sniff it, and promptly got a whack in the head from me and told to ‘go and get up’ on the back of the ute). Without a backwards glance, the snake headed towards the wood pile.

I followed, shovel in hand, but without boots and not wanting to do anything until I had something substantial on my feet.

Now, later, as I related this story to The Boss, I hadn’t even finished when he said: ‘You didn’t get it did you?’

I rolled my eyes. How the hell did he know that?

So the snake lives another day and we all came inside to settle our heart beats. What a way to spend the Australia Day public holiday!

Tell me, was yours a lot more calmer than mine?