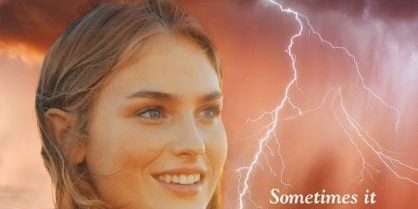 Sometimes I just have to pinch myself. Today is one of those days. I’m so proud to be able to show you the cover of my 7th novel!

When I started writing I had no idea it was going to get this far. I didn’t know I was any good at writing and I certainly didn’t think I’d still be at it seven books later! I guess I’ve always harboured a fear that one day I’d get caught out and someone would realise that I couldn’t write and I was really just a fraud! That fear still exists.

Of course, the reason it’s all still happening is due to you guys, as the readers. If no one read my books, well, I wouldn’t still be writing. Obviously!

When Ashleigh decides to flee her bully of a husband, Dominic, she knows he’ll hunt her down. The only way to escape is to disappear and reinvent herself.

Changing her name to Eliza and driving by night, she is drawn to the tiny rural town of Blinman. There she begins the long road to healing and regaining her self-confidence.

Then one day, on an excursion to a ruined homestead in the area, Eliza becomes fascinated by a family who lived there during the nineteenth century. But just as she begins to unlock the secrets of her own past, Dominic arrives in town, determined to punish her…

With a cracker plot and nail-biting suspense, Indigo Storm is the story of a courageous woman fiercely determined to reclaim her life and her belief in herself…

I hope you love the cover as much as I do. (Make sure you let me know by leaving me a comment!) It’s so cool have my photo of the ruins used and the girl is a perfect ringer for how I imagined Ashleigh/Eliza (I can’t tell you how often that DOESN’T happen!)