Stockmen learn to sing… And harvest 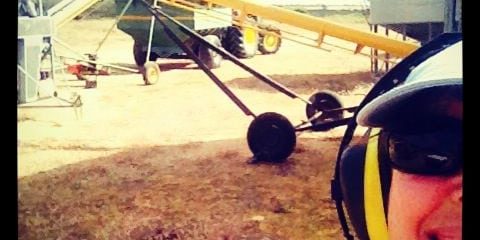 View from the top of the header

This must be one of the most frustrating harvests we’ve had in years! The wind has howled from the east – cool, moist gale-forced winds, which doesn’t let the moisture come down in the grain enough, so we can get it into the silos. I don’t usually take selflies, but as you can see (and anyone who follows my Instagram account) I’ve been a bit board and therefore taken lots of photos! From this vantage point, I’ve been watching watching four different augers pumping wheat into the cleaner. The Boss joked he hoped that sparks didn’t fly since I was sitting on two jerry cans containing petrol! There was one day where we had a smidgeon on blue skies, but out of the last week and considering it’s nearly summer, I’m calling it the weather crazy. Can you spot the dog?

Poor Weazel is waiting very patiently for The Boss to finish his day of harvest. I’m sure he’s trying to get out of the wind! Can you see him?

Saturday was very exciting though, because my dad and a heap of the blokes from the Orroroo/Carrieton community were on ‘Sunrise’. (It’s a TV show, if you don’t know.) Dad came up with an intriguing idea, of forming a 50 male strong choir to sing Advance Australia Fair, at the local rodeo. It which caught the eye of a reporter. Before they knew it, a camera crew from Sunrise was up at Carrieton, filming these very “brave” stockmen! (Fancy singing on TV in front of millions of viewers!)

You can watch the video here.

In case you’re wondering, my dad is the bloke in the blue shirt and fawn coloured pants. He’s also the pilot of that beautiful aircraft, BKT (Bravo Kilo Tango – it’s call sign).

A quick update on Crimson Dawn – I’m hoping that some time this week, I’ll sight the cover. The next round of edits are due back in a couple of weeks and then it goes to print in January. It will be ready for you guys on the 28th of April and I will be touring this year. (if any of you would like to see me appear at your library or in your town, can you email publicity at allenandunwin dot com and attention your email to Amy.

Also, don’t forget about the special Christmas Offer I have going at the moment.