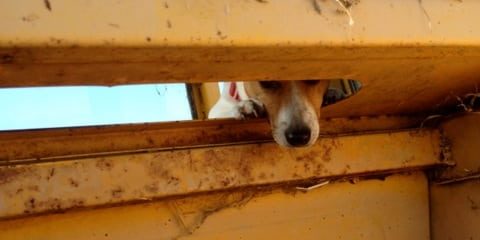 I often taken our Jack Russell with me when I’m out doing jobs on the farm. Especially if I’m feeding out hay. He’s loves watching the cows and calves and occasionally he is brave enough to sit up on the back seat and bark at them. (A bigger sooky la-la, you’ve never seen. This dog shakes and buries himself under the passenger’s seat, the minute we hit the bitumen!)

More likely though, he’ll be sitting on the floor of the tractor, sniffing for mice or smelling the netwrap (which I cut off the bales) for foxes – his arch enemy!

The nose you can see, in the above photo, is when he’s overseeing me cutting the netwrap off. We’ve been pretty busy weighing up lambs lately. In fact we’ve sent off 6,500 since the end of January. There does come a time that I get sick of this job! And, after weighing up every ten days, I’m about at that point! Still, there’s not many left in the paddock now!

The cooler weather and green grass has made sure the lambs are putting on nearly two kilos a week, which is great – genetics and feed are so important for turning off the right product.

Next week, we’ll be crutching, so once again, no rest for the wicked! And probably no writing, but there we are! *shrugs shoulders*.

What are you all up to?