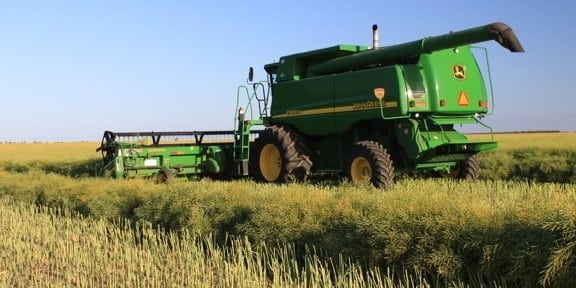 The very word seems to bring out the feral in every man, woman and child, involved in cropping.

It also seems to be the time for Murphy, from Murphy’s Law to rear his ugly head. Here are a few examples.

Upon jumping in the new (second hand) header, we bought this year, the Boss and Serviceman decided to take off a row of canola to test the machine. Excellent idea in theory, but perhaps it would have been prudent to check if the trap door at the bottom of the grain bin was shut. I have since noticed the sheep grazing heavily on that particular row. Canola, apparently, is liked by sheep. It is good practise to make sure that the man holes in silos are shut too. It just makes work if you have pick up a few tonnes of wheat that have flowed, so smoothly, despite the sample being terrible, onto the ground.

Before loading trucks, another fantastic idea is to check the fuel in the auger. If you don’t, bets are, the auger will run out of petrol. And, there won’t be any left on the farm. This will avoid a “quick trip” to borrow some, from the neighbour.
When visiting the sample huts on a cool, overcast day, no matter how sternly you speak to both the grain and the girl testing it, the moisture won’t go down. Until it’s only an hour before dark, then the moisture will drop so low, your head will spin. The rest of the night will be spent harvesting.

As you get closer to those last fifty hectares, it is advised, that you have every spare part needed for the header, chaser bin, auger and any other piece of machinery on hand, because without a doubt, there will be break down. And it’s quite likely the machinery dealership will have just sold the last part you need. There may not even be any left in Australia!

Perhaps it might be a good idea to keep an eye on the stock too. The rams or bulls have probably made a visit to the ewes/cows, while you weren’t watching.