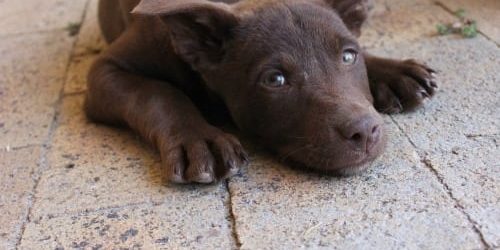 Time to meet the animals. This was Weasel as a pup – he was the quietest and least mischievous pup we’d ever had… This is Weasel now – he love to run, works best in the paddock and licks anything that moves. This includes lambs! Meet Miss Meita! I fell in love with her the minute I picked her up. She’s was cheeky, into everything and chewed ever single boot that was accidentally left outside. Here she is now – the same cheeky grin! We’ve been trying to mate her with our old dog, Wally (below) but they really need some lessons. In the end, we ‘milked’ Wally and Artificially Inseminated her. So we’re hoping for puppies, but we’re really not sure yet. Here’s Wally – his real name is Law, but when he was a pup, he was a bit of a Wally. Also, we got him from a bloke named Wal, so I’m sure you can make the links! I love this dog with my whole heart and soul. There is not another Kelpie in this world that has a bigger heart and want-to-work as he does, which is one of the reasons we’re desperate to keep his blood line going. His father was the most awesome dog out. Wally has also been poisoned and snapped BOTH his achilles tendons in his back legs, been in a toe to hip cast (both legs) for six weeks and come back working. He’s the biggest sook too.Did I mention I love this dog? The reason we have as many working dogs as we do, is because we run about 9,000 of these things… Which means around 9,000 lambs (mostly more.) … for these things to eat. There’s about 400 odd cows plus their calves, running around on our place And we grow a bit of crop. Canola, wheat and barley mainly, but throw in a few oats for sheep feed. These things are the bane of my life. I hate them with a passion. After losing three dogs to snake bites, having two in my house and this one, who snuck in between the glass and fly wire sliding doors, they are not welcome around the house. In the paddock is fine, but if they chance upon me, anywhere near the house, they will be made short work of.

So, that’s me, my family and my farm in a nut shell.

Now, tell me about yours!