Let there be rain! 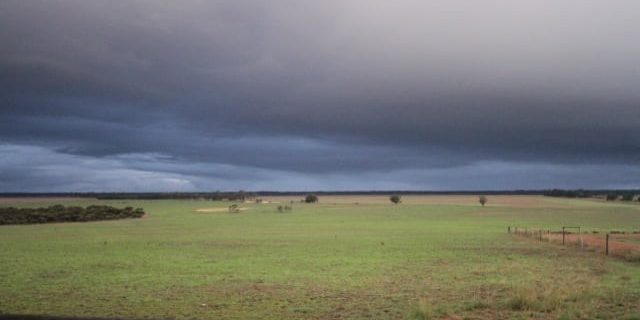 Tonight, when I looked out of the window, the light was ‘just perfect’. The green was spectacular, the boganvillas which are on the fence light glowed with extra colour.

‘Look at this,’ I screeched to Number One son – we were home by ourselves and I’m allowed to screech then. Usually because I’m in competition with a yapping Jack Russell.

Grabbing the camera, I raced outside. It wasn’t until the moisture from the days showers started to seep through, I realised I was only wearing socks. Yuck! I hate wet socks, but I braved them to snap a couple of these pics. I hope you can understand how gorgeous this view is to us. The green grass is precious. As I started to come inside, a few fat drops plopped onto the pavers. I didn’t think much about it – it had been trying to rain all day for only six mills in the gauge.

I shut the door, put my camera down and turned. The roof erupted as the massive drops, which seemed to come from nowhere, pounded into the tin.

‘Where the hell did that come?’ I wondered out loud as Number One son came to stand next to me.

‘They sky, Mum,’ he answered as if speaking to an intellectually impaired person.

Yes, yes. The sky. But there were barely any rain clouds on top of us.

Anyhow, that rain pelted down, leaving water gushing down the driveway and puddles when it had finished. Which it did, in all of about five minutes. But by hell I loved it while it was goin,. Wish it could have lasted all night!

As a post script, over this weekend we’ve had nearly 40mm of rain – probably half of it falling while the boss and I weighed up lambs for next week’s truck. But I have to say, I didn’t care. If it keeps going this will be our best start to a season since about 2008!