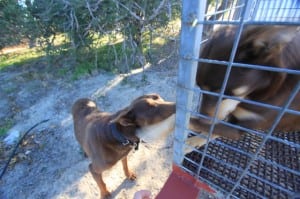 Meita talking to Law through the cage

I’ve always found Harry Houdini’s escapes quite incredible, but I have to say Meita has well and truly put herself up there with him!

Now there comes a time in every girl’s life… And yes, Meita has hit ‘that’ age! It’s really quite important that she doesn’t escape from her cage and become ‘friendly’ with the other two dogs, because; one)  she’s too  young to have pups first time round and two) I am NOT ready for cute little puppies running around, chewing everything and basically being gorgeous-but-annoying! I have enough trouble keep up with my own kids!

The lock in this cage is a one of those long sliding pins that are held fast by a lug. You would think it would be fairly hard to undo a lock like that.

I watched Meita used both her nose and her paw to slide the pin out of the lug, push the gate open and jump down! ‘Look mum, no hands!’ she grinned as she bolted up to say hello, closely followed by two very interested male dogs, doing their best to attract her attention. Meita was only interested in saying “hi” to me and running a million miles before I caught her and put her back in the cage!

After that effort, the door was firmly tied up with a piece of wire and we didn’t have any more escapes for a while. Albeit lots of howls asking to be let out.

Then last night the Jack Russell, who had been sound asleep in front of the fire, decided about 3am was a good time to start barking. It was unusual and enough to make me get out of bed and go for a look. Couldn’t see anything and figured if one of the dogs had broken their chain, I’d hear it dragging on the paving outside.

Other than the JR’s growling and barking, which didn’t let us get back to sleep, there was no noise. JR was obviously have a seniors moment.

Next morning, as I fumbled around in the kitchen, trying to make coffee so I could wake up, a happy-with-herself-face appeared at the window. And there was Meita, standing on her back legs, paws on the window sill… The wire ? Well it was missing. (I always wondered if she ate it!)

I have since got a chain and D-shackle around the door of the cage – let her try and get out of that!

Do any of your animals escape?