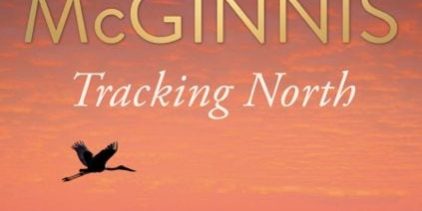 Okay, got to admit straight up, I’m a huge fan of Kerry McGinnis! Loved her first few books, including her non-fiction piece, Pieces of Blue and late last year, she releases another book called Mallee Sky. That is one of the best books I’ve read in a long time.

Kerry and I are sharing shelf space this month! We’ve both released news books. Hi Fleur, thanks for having me back again with my new book

TRACKING NORTH (Pub.Penguin. Out March 26, 2014)
For me, writing is a sort of disease. I caught it when I was nine and the infection has never passed. Even when I’m occupied with a novel new ideas for stories keep sprouting in my mind. Some I jump on (‘Preposterous!’) some I incorporate in my current piece (‘That could work’) others I file for future reference. With so much going on upstairs it’s not surprising that I forget birthdays, phone numbers, and whether I took the chicken out of the freezer this morning. (Oh, well, fish for tea again.)

The great thing about it all is that nothing I write needs researching. That’s the advantage of no longer being young and of having had a chequered past. I write about the bush and the people I’ve met there, drawing on my own life for my characters’ experiences. It’s the nine?hours?drive?to?town bush that I mean. The big country where the roads are two wheel tracks and areas are measured in the hundreds of square miles. Where the bitumen doesn’t go and the weather has the final say about everything. I lived that life. I learned the endurance that men like my characters Quinn and Clem show; and the truth that my heroine Kelly discovers: that life is always a compromise between the dream and the reality and that happiness comes from settling for something somewhere between the two.

Nothing fosters humour like adversity, and battling the Wet and the Dry of the far north is like living on a battlefield where Nature is the firepower. In the face of the mordant truth that seems to be the rule governing outback living: If it can go wrong, it will, there is no point despairing, you have to get on with it. If you’re stuck axle deep in mud you have a choice, walk or dig. If you’re left as Kelly is ? homeless, jobless, and with two children to raise then you must embrace what you know, do what you can and make the best of your chances.

Somebody once said: It is better to travel hopefully than to arrive. It’s actually not a bad way to describe a good read. If you empathize with your protagonists you want them to win – but not just yet! That would be the end of the story. And if there were nothing to struggle against – if the odd flood, fire or drought (been there, fought them)? didn’t happen, then why would the reader continue to read?

In novels, as in life, it’s the people you meet along the way that makes the journey memorable. I was lucky to have grown up in an era when the celebrated ‘bush character’ was real. Not the corks? round?the?hat?swaggie of popular city myth, but the individual made a little different by a life spent battling, in loneliness, against harsh and sometimes savage conditions. Individualism is only madness to those bred to conform; children know this; battling underscores it, just as a life lived close to it teaches that Nature is the one real adversary of man. So you need that toughness the bush breeds into her people, that sardonic humour, in order to survive.

None of my ‘characters’ however odd, are overdrawn. They inhabit the world of memory in the remembered station kitchens and stock camps of my youth. As does the country itself down to the last shiver of gum leaves silhouetted against a rising moon when there were cattle on the camp, and I was starting my watch, and used to dream of the day (once the droving was done and I had the time) when I’d write it all down in a book, just the way I do now.

I guess you have to be lucky, but dreams and reality do sometimes meet!