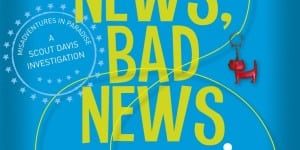 I’m really pleased to have Maggie here today. I read her book, Good News Bad News a few weeks ago and I have to say, it’s an absolute cracker! It’s witty, addictive – I was hooked from the first page – and fast-paced. If any of you are fans of Sue Grafton (which I am) or Janet Evanovich, I think this story is for you. And as you’ll see in her ‘letter’ to us, Maggie has a way with words that just makes you laugh out loud!

Fleur has kindly invited me to be a guest on her delightful blog and tell you about my latest novel, Good News, Bad News.This is my first time on a blog and I’m thinking that it’s rather like writing a letter to people I don’t know. Actually, I’m hoping someone will phone, so I can tell them that I can’t talk as I’m writing a blog.

Now, where to start? Well, Good News, Bad News is my second novel featuring the intrepid investigative reporter Scout Davis – a woman who, like most of the women I’ve ever met, is warm, thoughtful, funny, smart, strong and capable. Not for me a ditsy heroine who needed to be rescued by her man, unless, of course, it suited her purpose.

Good News, Bad News comes hot on the heels of Scout’s first investigation in Mad Men, Bad Girls. Both novels, now branded as the Misadventures in Paradise series, are set mainly in Byron Bay and other parts tropical. And they’re not conventional crime novels – oh, they’re still packed with mystery and great crime, but moral and social issues, family and community matters, romance and humour are drawn into the tangled web. And sex, too. Mustn’t forget that.

In Mad Men Bad Girls, Scout dealt with the entrapment of foreigners and Australians by a sinister cult, as well as some pretty nasty goings-on in the change rooms at a posh private school. Much to my delight, the book received rave reviews, became an instant hit with readers and was nominated for the 2012 Ned Kelly Award for Best First Fiction. This amazing response, coupled with the fact that I had a brilliant publisher and had loved every minute of the novel writing process, spurred me on to write the second book in the series. It sort of would, wouldn’t it?

And now it’s done. Yep, the second Scout Davis novel, Good News, Bad News has made it from my desk via the marvelous team at Pan Macmillan Australia to the bookstores and is ready to fall into the hands of Scout Davis fans. Hey, you have to pay for it, but you know what I mean.

So, what’s Scout up to in Good News, Bad News?

Ha! This time my intrepid heroine is taking a holiday at home in Byron Bay when Hermione Longfellow, one of the eccentric Anemone Sisters from the hills, confronts her in the supermarket. Scout is wary, but sure that rumours of drinking chickens blood are just idle gossip, so she stops to listen. When Hermione asks Scout to track down her sister Nemony’s AWOL husband, believed to have died at sea thirty years ago, but recently popped up again on the Great Barrier Reef, Scout jumps at the chance to work a cold case. Meanwhile, Scout’s own sister Harper despairs over her husband’s odd behavior, and then receives a shock that has huge repercussions for her future.

But wait, there’s more. Scout’s journalist boyfriend is finally coming home from Afghanistan. Trouble is, Scout thinks she may be falling in love with irresistible cop Rafe who may or may not have discovered Scout’s unusual hobby. And then … well, you’ll just have to read Good News, Bad News to find out what happens next!

Happy reading and thanks to Fleur. I enjoyed the visit, nobody phoned and I’m back at my desk working on Scout’s next case.