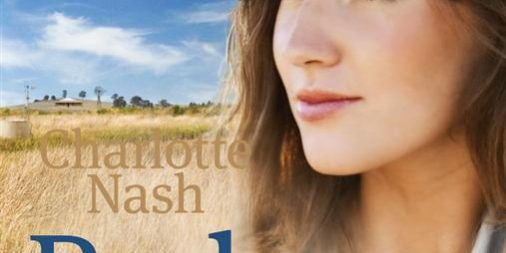 Sometime ago, I was asked if I would give an endorsement for a debut novel called Ryders Ridge. I was sceptical because I wasn’t sure what I would do if I didn’t enjoy it. As an author I always feel sick if someone doesn’t like what I’ve written, because so much love and effort goes into to putting those words on paper.

Anyway, I agreed. It was just before Christmas and I popped the book into my handbag to read as we were driving across the Nullarbor to spend the break with my family. Half way into the trip, the kids firmly entrenched in their own books and The Boss deep in his own thoughts, I cracked opened the first page. And didn’t stop until I had finished.

Ryders Ridge has all the elements needed in a Rural Romance – a sexy farmer, a couple of breath-taking accidents, a secret and a doctor who perhaps needs a little healing, herself.

Charlotte Nash’s debut novel is a wonderful read and I hope you enjoy her blog as she tell you about how it came into being.

The wonderfully generous Fleur McDonald invited me to write a guest blog, so welcome to my friendly takeover! I’m honoured to be able to open this small window into my adventures and my first book, Ryders Ridge.  🙂

I’m actually writing this from Auckland. It’s my last day here, which feels fitting given how my first published novel came to be. Over the last few years, I’ve spent countless nights travelling and making new (sometimes short-lived) homes in fascinating places, from north-west Queensland and the Pilbara, to Sydney and now Auckland. Some of this travelling was for my studies (particularly med school), some for my job (as an engineer and incident investigator), some following my husband’s work, and some because of floods and other upheavals. Every new place has had its special moments and darker times, and I’ve begun writing books exploring the Australia I’ve experienced. Stories of adventure, romance and secrets, with characters living and loving in challenging situations.

The first of them to make it into print is Ryders Ridge, inspired by my stint in north-west Queensland as a third-year medical student. In reality, that time was really a rather unromantic and lonely, despite a bunch of interesting (sometimes funny) things that happened, and I never imagined the experiences would seed a novel. When I began writing fiction seriously in 2007, it was mostly sci-fi and fantasy that I’ve always loved (and still do) and I left my engineering job in 2010 to pursue writing (mostly technical) full-time.

But then came 2011, a changing year. Brisbane flooded and our suburb was hit hard. In the broken aftermath, I went to work in Sydney. I came home again, but somehow remade inside. I took up motorbiking, got back into sailing, made new friends. But I wasn’t sure where to take my writing. Then, during a serendipitous conversation at our writers’ group retreat, I realised I’d had many interesting experiences, like my time in north-west Queensland. And I wanted to form words around them.

What followed was a truly mad three weeks putting down the first draft of Ryders Ridge. (I may have been dared. I’m often up for those.) I used my experiences as the bedrock, but invented a lovely romance story to thread through. Writing that draft was intense, night and day, buoyed by chai and encouragement from my awesome writers group. The manuscript then had a journey of its own through rework and submission, but it’s turned out to be a story I’m immensely satisfied with and I hope readers will enjoy. And since this first gate opened, I’ve more stories to tell. I’ve just finished a second medical romance book set in the Pilbara – a place I travelled across as an incident investigator. I have ideas for a third novel, set within a regional army unit (based on time I spent on-base as a med student) and a fourth set in the world of yachts and remote coastal paradises.

I’ve met so many wonderful people and seen so much awesome on my journeys, it’s lovely to be able to reanimate those experiences a second time through fiction. All these stories speak to me of adventurous lives that are very real for some people, and that can be romantic and heartbreaking in equal measure. The first of these tales, Ryders Ridge, means a lot to me, and I hope will entertain you too.