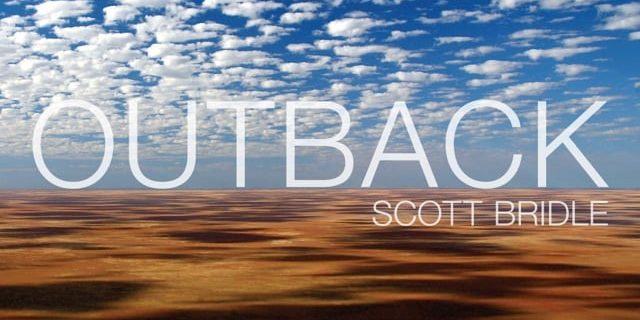 Let me try and paint you a picture. It’s five in the morning and chopper pilot, Scott Bridle (http://scottbridle.com) is pacing the outside of his machine. He’s doing his checks; oil, fuel and making sure it’s airworthy.

From the yards, voices of the stockmen, getting ready for a day mustering, hang in the air. The first motorbike roars to life, scaring a flock of galah’s, who had been drinking from a nearby trough. Their squawks echo across the land.

Scott climbs into the helicopter, slips his head set on and with moments the blade are whirring and he lifts off, dust scatters below the machine and, in the wind created by the blade, the bush vegetation bends towards the earth. Scott with his trusty camera

His constant companion, a Canon 1D, sits in the seat along side of him, waiting to be used in ‘the perfect shot’.

Since he was a young child, Scott has been holding a camera. Do you remember those chucky box-like cameras, with films that had to be developed and the wind on mechanism? Well, he was given one when he was six or seven. From that time, he’s followed in his mother’s footsteps and been snapping photos.

Scott told me his childhood was filled with his mother, Jane, recording memories by photograph, as well as painting and sketching. His sister, Sally, is also an accomplished artist.

This book, OUTBACK, is the work of many hours spent aerial mustering. He’s keen to show off our great land and he hopes it may encourage young people to head out bush.

Our Outback areas are sadly lacking in young people. Some stations, which in the past, have employed eight or ten blokes during mustering, are now reliant on pilots like Scott, to bring their stock to the yards for market or shearing. This has meant heli-mustering* is being used in areas, which traditionally, it otherwise wouldn’t be. Of course this extra work provides more photo opportunities!

My regular readers will know I love photography too and OUTBACK has pride of place on my shelf. It’s a different and unique look at the beauty, vastness, isolation and size of this amazing country. I’m so thrilled someone who is the ‘real deal stockman’ can show you what we’re privileged to see every day. Just from a different angle.

OUTBACK is published by Penguin and available now.

* (If you don’t know what aerial mustering, or heli-mustering is, it’s when the stock are spotted by air and the aircraft is used to guide the stock towards the yards. It offers a unique perspective of the way the animals move and walk when mobs.)