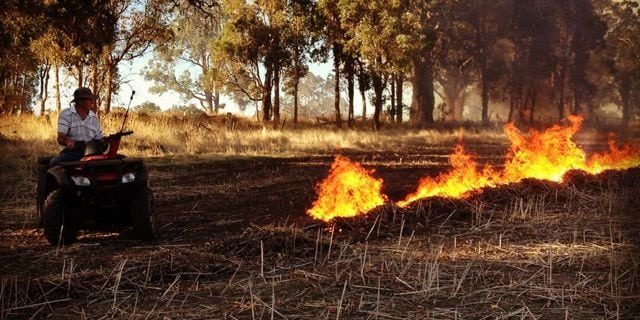 Now let’s not think in the gutter here, kids! F is NOT what for what you’re thinking!

It’s for Farming, fences, fires, fertiliser, foxes and ferals. But today we’re only talking about three of these.

Amanda from Bush Babe of Oz – F is for FENCES

Among the tools farmers use in their everyday work, fences are among the most important.

Like a fence in town, it marks out boundaries between one property and the next. Fences also prevent stock from wandering onto someone else’s land, and also act as pasture management and animal husbandry tools for farmers. The farmer can do things like keeping stock separated into breeding and commercial groups like steers, manage how long bulls stay with females, and move these mobs about to make the best use of grass and water points. Fences can be made of all kinds of material and for various purposes, depending on the type of operation. They can be made from plain wire, barbed wire, and timber or man-made rails, and usually use steel or timber posts. Some are powered by electricity, requiring just a single plain wire to prevent stock from escaping. And some are made from mesh to prevent smaller animals from getting through (these are sometimes used to keep animals like wallabies and dingoes OUT too).

There are people who specialise in putting up farm fences, called fencing contractors, but many farmers take on this job themselves. (This is not a normal farm fence – this is our pool fence which keeps young humans and large equines from swimming unobserved!)

Our property has a lot of trees, so timber is often used for fence posts. The timber is barked and split before being placed in the ground and drilled for wire to be pulled through. Timber can last many decades, making it a very effective option for the farmer. Fences are an intergral part of the farmer’s landscape.

Gemma from Rural Miss – F is for FIRES

It’s coming up to ‘that time of year’ again. Burning. The deliberate paddock fires that are about to begin are strictly controlled and monitored and an important part of many farmers cropping programs. It’s also the time of year farmers neglect to tell their wives what is going on, and I have had more than one load of washing end up stinking from a controlled burn, and the house fill up with smoke as I have had all the doors and windows open. Before starting to burn we have protocols to follow. We must obtain a burning permit, as it is still not open season for lighting fires. Part of this is adhering to the guidelines of the permit such as starting the burn at a particular time of day and having a certain number of fire units available at the burn (we have 3). A ‘firelighter’ is used – which has a constant flame. The firelighter is lit and then it is trailed across the paddock, usually on a motorbike as its closer to the ground. The motorbike races around the paddock lighting up the stubble as it goes. The flame is dotted along the ground and eventually it will make a combined line of fire for the wind to carry. The fire units patrol the perimeter of the fire to make sure it doesn’t cross through fences, get into bush and burn areas we don’t want burnt.
Correct temperature and wind are essential in a good burn. The hotter it is, the better the burn and we need the wind to carry the flame across the paddocks. I know if I am at home and the smoke thickens that it is burning good – particularly canola. The oils in the stalks of the canola burn readily, it stinks and it puts up a fairly thick smoke. There is nothing like a good burn. Yes it stings your eyes, makes your clothes stink and covers you in soot – but those paddocks look amazing afterwards, ready to be seeded and grow some crops. Fleur from here – F is for Fertiliser It doesn’t look very exciting does it? But this pile of little white granules will help our land grow beautiful, lush, rich grass or crops.

This is a pile of Super Phosphate Fertiliser.

The Esperance area is notorious for being trace element deficient. Quite a lot of the farming land around here, is deep sand and all the minerals and goodness can leech away or it just isn’t there in the first place.

Because of this most farmers spread fertiliser to help our land produce better than what it usually would.

We don’t just use super phos either. There are heaps of different kinds of fertiliser; Muriate of Potash (something we use a lot of) and Urea (great for giving the pastures or crops a bit of a kick along when it’s been a bit wet or we need a bit of extra oomph in the feed) is just a couple.

One of the other things we do, is mix trace elements like copper or selenium through a fertilisers. Animals need these to be healthy and mixing it through the fertiliser means that when the grass grows, it will contain the minerals and trace elements the animals need, so they’ll get it through eating the grass.

Fertiliser can be put on in a few ways; one is the plane, but that’s not used very much over here, unless it’s REALLY wet. One is a Super Spreader like this one: Bogged to the hilt

…Although this bloke is bogged to hilt!

The fertiliser sprays out of the back of the bin that you can just see above. They use all the same types of GPS equipment that tractors and headers use, so they don’t drive over the same spy twice.

The Flexi N type fertiliser (which is a nitrogen) can be sprayed on through a boomspray.

Fertiliser is integral to our farming enterprise. It’s expensive, but you have to disregard the price for the benefit. In fact, it’s so important, I wrote a novel about it!