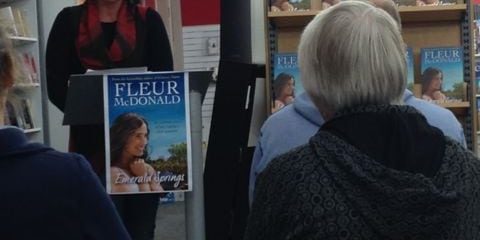 It’s been a while now, since Emerald Springs came out. Three months in fact! Like I said in a previous post, it was pretty hard to write – there was lots going on.

One of the things that kept me focussed was that I had  huge tour in front of me. We were covering South Australia, Victoria and Queensland. It was being broken into two sections: BSH and ASH (before school holidays and after school holidays!).

Flying into Adelaide is one of my all time favourite things to do. I love recognising the buildings, picking out where I went to school and where my brother lives. It’s familiar and even though it’s not my home (although it was for five years while I was at boarding school) it gives me a sign I’m not far away from the mid-north. The first event was in my home town of Orroroo. It was put on by my sister who runs a function centre called The Blacksmith’s Chatter. But before that happened I managed an overnight at mum and dad’s station. Let me tell you, the best way to start a tour is to sleep in your childhood bed, get up before the sun, walk the paths along the top of the creek and listen to the galahs screeching. Seeing the sunrise over the home dam and feeling the bite of the early morning air on my cheeks was soul mending. I wish I had more than twelve hours there! My sister, Susan and I

My sister put on the best show – they say if you can make it in your home town, you’ve really made it. Well I’m not sure that I have done that, but The Blacksmith’s Chatter was sold out and I saw so many friendly and well-known faces from my childhood. In fact I think I may have hugged every person in the room! Symon from Tea Tree Gully Library and I

One of the highlights of Adelaide was the Tea Tree Gully library event. I mean seriously, who could not love this bottle of wine? After five days of non-stop events (I think we did two events every day and there was one day we did three. And bear in mind there was a fair bit of travel in between!) I headed home to find out that Emerald Springs had debuted at number one in the Allen and Unwin top ten best sellers list. I can tell you, I spent a few hours down the beach with the dogs, that night, contemplating the last twelve’s months and how lucky I was to have that result. A few people who were reading my book sent me photos but none better than this one. I’m sure there are rules about reading and driving… Even if it a horse drawn wagon! Even though I was home for two weeks, it seemed like only days before I left for Melbourne. It was a lot greener when I flew out of Esperance this time. Seeding was underway and most of the paddocks I could see that had crops poking through were canola. I loved chatting about Emerald Springs. In this book I’ve talked a lot about my main character, Milly, finding herself. Finding her own identity and understanding the growth she underwent through out the book. I guess this is something I’d been struggling with myself, as a newly separated woman, so as I was writing Milly, I was undergoing the same type of issues and change. After whirlwind trip through regional Victoria (where it was bloody freezing, Ballarat in particular!) we were pleased to see the sunny skies of Queensland. Amy (my publicist) and I had one afternoon we were able to take in a few sights and I admit to going for a ride on this huge machine. Pip Courtney and I

A quick trip to the ABC office netted me the best afternoon! I caught up with my lovely friend, Pip Courtney (anchor for the ABC TC program, Landline). It had been two years since I met up with Pip at the Ekka, so it was lovely to be able to give her a hug in person. Richard Fidler and I

She was lovely enough to introduce to me to Richard Filder. He is my radio idol; one of the most incredible journalists I’ve ever heard. His radio program, Conversations, is my favourite and I listen to it every night, on podcast, when I go to bed. I reckon he could get anyone to tell him their darkest secrets!

So that was the tour. I stole a whole thirty six hours after the tour finished to visit my beautiful friend Bush Babe of Oz, but that will be for another post!