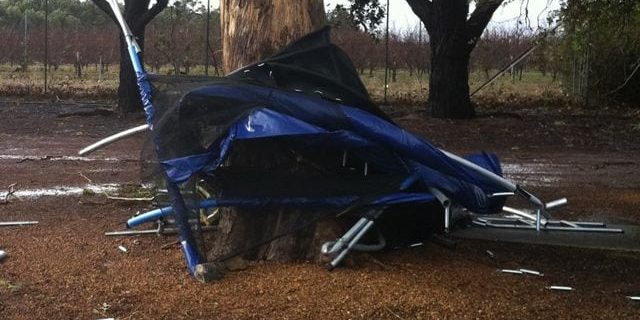 We know, we know! We’re a day late in posting this week. It was a public holiday here in the West yesterday and besides me being out at the farm and madly cooking and cleaning for the week ahead, Rural Miss was also doing public holiday farm things and Bushbabe was busy with her things. So, explanations done, it’s on to letter E.

Amanda: E is for… The environment, of course, is everything for a farmer. It’s the lifeblood of every farming enterprise I know – from deep below the soil where water runs unseen (and able to be tapped into with bores and pumps and mills) to the soil and grass and tree types, to the air and sky and clouds and sun. Every single part of that natural chain of resources is essential to the farmer.

A farmer needs to be able to think short-term, medium-term and long-term with how he or she handles their environment. Their success as producers of food and fibre depend on a healthy relationship with their resources.

Every farming environment is different. For example, our place has spotted gum ridges looking rolling granite country down to speargrass river flats. It also has bottle tree scrub (which is prized for its wonderful rich soil). Farmers can tell what their soil is simply by looking at the trees and grasses that grow naturally there – they learn to tell when country is ‘hurting’ and needs a break from grazing or cropping. Other enterprises (like the one above) are on alluvial creek flats which have wonderful rich topsoil and access to water, lending it to cropping.

Farmers use science to help adapt their farming practices to make the best use of their environment, alongside the hard-earned wisdom of those who know the special characteristics of their countryside already. Techniques are used to halt erosion, to harvest water when it rains while keeping healthy waterways, and to use the sun to power pumps and fences for their livestock and crops. New ideas and techniques are being developed and tried throughout Australia’s farming community all the time.

Some are high-tech and some are bush wisdom – keeping an eye on your insect, frog and birdlife to know how your environment is going.

Each farming practice will tailor their techniques according to their enterprise – whether it’s a huge cattle run in the Red Centre, a wheat farm in WA or a cane farm in Queensland.

Working with Mother Nature is what we all do! E is for Electricity

Electricity seems like such a simple thing, and something we often take for granted.  If we need water, we turn on a tap (although we have run out of water a number of times), hot water &  we boil the kettle or a light on & we flick a switch.  Simple.

Every year our community seems to have one or two pretty ferocious storms.  We get used to the standard storms – thunder and lightning, strong and gusty winds, and the usual power outage.  On the 10th of June 2012, this all changed.  We were about to witness one of the biggest storms our region had experienced in recent years and it would hit a far greater area than usual.  It came on in the morning.  As we were standing in the kitchen our trampoline flew past the window and landed on the powerlines out the front of our house, snapping our hills hoist clothes line off and taking that part of the way with it.  I’ll never forget the kids faces as they saw their 3 week old trampoline be picked up like a feather and destroyed in a matter of seconds. And so began the week without power……

We are no strangers to power outages.  Usually, the biggest concern for us is our freezers as we do a big kill of beef, and smaller kills of lamb and pork throughout the year and this meat is precious to us.  We have 2 upright freezers and a chest freezer and these hold a lot of meat.  The power outages that we have usually last for somewhere between 6-36 hours, and as our property is at the end of a spur we can’t do much about it.

Sunday went on by, and the storm had hit much of the South West – thousands of homes were without power.  Our town was also without telephone and internet access, making it really tricky to get hold of people.  There was no mobile phone coverage so the local daycare and schools were shutdown as it is too dangerous to have so many children in a place with no communication with the outside world.  For Chris and I, we were kept up to date via the wireless, and the wonderful internet (by some stroke of luck our place is one ‘hotspot’ that seems to still get the internet and mobile reception!) For the children, power outages are a bit of a novelty to start with particularly having candlelit evenings.  But the novelty wears off pretty quick, particularly during the day.  In June, Jack had just turned 4, Grace had just turned 2 and Eva was 14 months old.  THIS was what made it the trickiest of all.  Grace and Eva were still having milk bottles – heating up the milk was fine on the stove, but we had no running water to wash dishes or ourselves.  I was carting water from the chookpen over to the house (we have a tap at the chook pen which is fed by gravity from a rainwater tank) and boiling it on the stove to do the dishes – not a big issue, just an inconvenience.  I spent the days outdoors in the wet with the kids.  We were building an extension on our sheep yards, so helping out passed the time.  At one stage, I had my niece and nephew for a day aswell.  I can tell you having 5 kids 4 and under is not fun with no power and in the middle of winter.   Nor is the mountain of washing that stacks up.  When power was restored to town, I was taking our washing in to the “Flax Mill” which has washing machines and dryers that came be used for a gold coin.  My clothes line was destroyed, and at this stage with the wet weather not easing I was utilising those dryers in town as much as possible. By 5.30/6pm at night, darkness would set in.  We would cook simple meals on the gas cooktop (thank goodness for LPG) or on the BBQ. We had candles and an old kerosene lamp that we would fire up, then proceed to read stories by torchlight to the children, and get them into bed by 6.30pm. Chris and I initially would sit outside and watch the lightning, have a wine – but then move back indoors to the warmth of the fire and listen to the radio.  I was so thankful that our house is warmed by a wood potbelly – as one year we had a big outage before we had our current fireplace in and it was FREEZING (and I had a newborn at that stage too).  Getting back to the basics – music, candles, conversation (sounds pretty romantic, other than the fact we hadn’t had a shower in a number of days, had itchy hair and probably didn’t smell that great). We started passing the time by texting the ABC Radio who had full coverage of this event across the South of the state as so many homes were without power, and drinking wine from my carefully stored and saved wine cellar. On the 6th day without power (by this stage we had visited houses who had got their power back earlier and showered), our house was smart wired and we had bought a big generator.  What this meant was we could fire up the generator, run a lead to an outlet at the house and power 80% of our house (lights, fridge, water – YOU BEAUTY!!).  We left the bigger items off like the washing machine & oven, but it felt so luxurious having a shower in our own home,  drinking water straight out of the tap, boiling the kettle & being able to see at night time. Since this big outage we have had numerous, extended power outages, but it doesn’t worry me so much anymore.  I no longer freak out when a storm hits about the power going out – but nothing will ever stop me stressing out  about  what damage the storm is wreaking outside. I feel spoilt having a smart wired house and a generator.  I always open our doors to friends, neighbours – whoever needs a shower and have no water.  And I thank God & my lucky stars that we are fortunate enough to be able to fire up that geni whenever a storm hits.

E is for: Ewes

To me, ewes are the powerhouse of our farming operation. They produce wool and lambs – often more than one lamb!

This makes them a pretty profitable commodity to have. (Cows rarely have more than one calf and because they don’t have a fleece, it’s the calf which has to be sold to get a return on investment.)

There are many types of ewes in Australia, but by far, the most popular is the merino. (click here to read about this breed of sheep) The Merino has a wool focus, but obviously they have lambs too. The ewe lambs are often kept for breeding, while the wethers are kept for their wool. Although, these days, they are been sold for meat as well. Merino ewes in the yards

Another breed is Black or White Suffolks. These are a meat sheep, grow very little wool – and the micron is so strong that there isn’t a lot of call for it, so it never makes high prices in the sales.

Border Leicester’s are a beautiful, fertile breed of sheep. They milk well and have multiple lambs; I’ve seen triplets!

On our place we run all of the above sheep. We have a White Suffolk Stud (that’s a post for another day), merinos, breeding replacement ewes and Border Leicester X ewes.

The White Suffolk stud producing rams for our enterprise – that means we don’t have to outlay loads of money to get our ewes mated – we also sell the left over rams.

The merinos are mated with the thought that the lambs will grow up and take the place of their mothers, when they are too old. That way, again, we don’t outlay loads of money of buying in more ewes. We also mate merinos with white suffolk rams and produce a cross-bred lamb, which is sold for meat.

Our main enterprise in farming is prime lambs – the sort of lamb chops you’ll buy in the supermarket. Our Border’s are so fertile they can have two lambing seasons in a year and half, so we run about 4000 of these. So as you can see, all these different types of sheep merge together to make a profitable and meaningful enterprise!