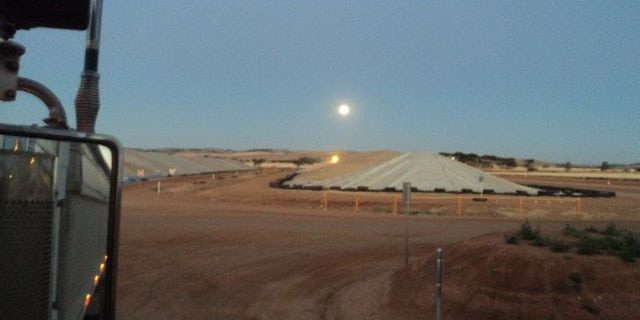 I’m wanting to hear some of your stories. Ones about women working on the land, funny ones, sad ones and everything else in between.

The reason I’m looking for these, is because I have the opportunity to address some city people in the coming months and would like to be able to share how incredible country women are – they just don’t realise it!

So I’ll give you an example.

The above photo is of my sister. She’s an award winning tourism operator, farmer and mum. She runs practically every minute she is awake.

I know the photo is a little blurry because her four year old son took it. He spends hours riding in the cab of the truck with her, as my brother, sister and I did with our dad, when we were young.

Here, she’s driving a 70 tonner truck for harvest. She carts grain for both her farm and many of the other’s around her area. This is a view from her window – gorgeous isn’t it?

Now when my sister was eight and half months pregnant, it was harvest and she was, as always, carting grain. The fit in between the drivers seat and steering wheel was a little tight – in fact she had rub marks from where the steering wheel rubbed on her tummy. Truth be known I think my little nephew loved it – he’s a farmer through and through!

Anyhow, one afternoon, she’d unloaded a truck load at the silos and was doing a walk around to check the truck – make sure everything was okay.

She spotted an oil leak. She knew the mechanic in town, so called in quickly, where he determined a bolt had come out of the chassy and needed tightening.

Trouble was, his stomach was bigger than hers and he couldn’t get in between the cab and the grain bins to where he could replace the bolt! (Isn’t that just like a country mechanic?)

They discussed how they were going to fix this problem. After all, any down time during harvest costs money. In the end, Susan (who is a size 10 ringing wet, when she’s not pregnant) and her tummy shimmied in with the new bolt and spanner, relaxed everything and shimmied out again.

The truck went, and harvest continued without her hubby having to get off the header and have delays.

My nana fell over and broke her hip two days before our wedding. When Papa found her, she told him to ‘put her in the wheelbarrow and get her to the bed. With a Bex, cup of tea and good lie down, she thought she’d be fine! Realistically, she was flown to Adelaide on the Royal Flying Doctor and spent over six weeks in hospital!

Now she wouldn’t think this is anything special. We country women just get on with what has to be done. We don’t recognise what we do IS special, is important to the smooth running of our businesses.

So these are the sort of yarns I’m hoping you’ll share with me, so I can in turn share with the city people I’m going to be chatting with in April. You’ll be acknowledged and afterwards, I’ll post my speech so you can read it too.

Leave you stories in the comments section. Thanks in advance!