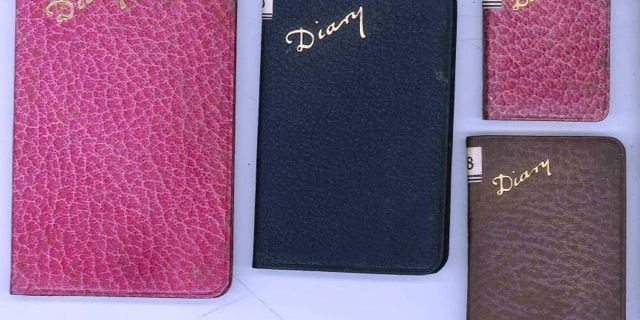 Gillo and Russell Woolf from our ABC radio in Perth had a brilliant segment on yesterday about diaries. They wanted to know if any of the listeners had ever kept one. I wish I could have posted it hear for you to listen, because it was so good. But there wasn’t a podcast made of it.

They played snippets of hilarious diaries pieces – a young girl lamenting how gross boys were, then a couple of weeks later, how much in love she was with one of the fellas in her class, had me in stitches. (Not the best when I was trying to gently remove three dry cows out of a mob of about 50 pregnant ones. The boss threw me a few stern and what-are-you-doing looks).

I was intrigued, though. Diaries have always been a big thing in my family. My Papa was a compulsive diary keeper but he never wrote anything personal in them. His carefully penned entries were all made with historical purposes in mind. Religiously he would record weather, rainfall, wool cut and how many runs he made in his cricket innings. But that was all. Do you keep a diary?

Even the reference to his first born child, a son at that, went something along the lines of ‘Phyllis and I are the proud parents of a son. Born at 10.22pm.’

In contrast, both my Nana’s were letter writers, all of which held loads of personal things, as letters do!

My upcoming April release, Silver Clouds has many references to diaries. In fact it’s how Tessa finds out much of her family’s station history. Letters also rate a big mention.

I was a letter writer and like to think I still am – sometimes there might be a of time lapse between answers though. I used to keep a diary. My entries were rather boring:

‘Gasp, so and so rang me last night.’

‘He held my hand on Saturday!’

I was big on the !!!!!!!!  and underlining  when I had something very exciting to say. Not to mention the love hearts which were drawn in the corner of the page.

And of course there was the love-sick poetry that is compulsory for a love-sick, wanna-be writer teenager. So help anyone who ever finds where I’ve hidden them. They are NOT for publication!

Nowadays it seems that few people keep diaries other than to keep track of their appointments. Not daily musings of what is happening within the wall of their personal life and I wonder if they are skills we are losing? There is no denying the look of excitement on a child’s face when they get a letter addressed to them in the mail but it’s hard to get them to sit still for long enough to reply to the sender.

To me, diaries alway held some mysterious appeal. So much so, when a book is nothing but diary entries like ‘The Unfinished Diaries of Elizabeth D by Nichole Bernier’ I tend to be glued to the pages.

And here’s a hard question. When just left lying around could you stop yourself from reading someone else’s diary? I know my brother couldn’t when he was a kid.

So, with all that in mind, I’m curious. Are you a diary keeper? One who writes your innermost thoughts down?

Do you write letters? Proper hand written letters, not emails.