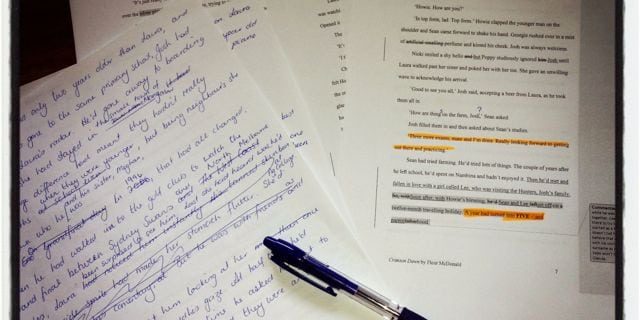 Some times there is nothing more I love than editing. After all, the hard work has been done, hasn’t it? The words are on the page and all I have to do is rearrange them, or make them better. Yes?

Perhaps there is a little more to do than that.

Some times there is nothing I hate more, than editing. The editor has pointed out big holes in the draft, there is more chapters to be written, in the case of Blue Skies, a whole other character.

‘If we do what I’ve suggested, it will add more depth to the novel,’ is a phrase frequently read in the report.

My lovely twitter buddy, Wendy Orr (author of Nim’s Island, Return to Nim’s Island and many kids books and basically awesome lady) told me once, there are three stages in editing.

One: We read the Editorial Report and say, “NO, Editor is WRONG, they don’t get the book, they get me, they don’t what I’m trying to say…” Sort of a whoa-is-me, no one-understands-my-creativeness sort of stage. Two: “Bugger, Editor is RIGHT. There are holes and I don’t know how to fix them.’ Then I usually graduate on to: I’m hopeless, I can’t write, I’ve completely stuffed this book.” To  “Oh my goodness, how CAN I FIX this mess? In fact, I can’t fix it. Nope, the book will have to be shelved. I CAN’T fix it.” I walk away, shaking my head.

Wendy then says stage three comes: ‘Aha! yes, Editor is still right and I’ve worked out how to fix it.

The edits for Crimson Dawn arrived on Friday. I have a seven page editorial report, plus all the comments on a 300+ page manuscript.

I have to admit I was pleased when they landed in my in-box after four o’clock because I never read these reports without a wine in hand!

Usually I’m overwhelmed with the suggestions and comments. But the thing is, I trust my editor. She’s good. I believe if she has asked me to make a change, there is a reason behind it. A reason, that you, the reader, will like better than what I have written.

It’s a matter of digesting what she has said and not racing in to make changes before I’ve thought through it properly. Maybe with Book Five, I’ve finally got the picture. I did just what I’ve suggested here and today I’ve raced through the first four chapters. I’ve given Laura (the main character) more of a voice, you’ll get to know her a little better in the first chapters, rather than Thomas, whose life runs parallel with Laura, back in the 1930s.

Tomorrow, after weighing lambs, raking some hay and getting the chaser bin ready to start harvesting the canola on Tuesday, I’ll be back at it. Trying to make Crimson Dawn the best it can be.

And you know what? I’m honestly LOVING this particular edit. WOO HOO!