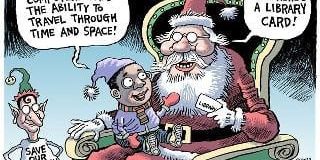 It’s about this time of the year, kids start writing their wish lists for Father Christmas. Actually, truth be known, they’ve probably been doing it, secretly, since last Christmas.

I don’t see the lists until they’ve been neatly written out, but I can imagine the lines being drawn through certain items as they year goes by, they grow, mature and change their minds.

Christmas seems to be approaching really fast this year. Harvest always makes time slip by quickly and somehow, the 25th of December seems to just arrive. Usually, I’m running around the day before, still buying presents, checking my food list and making sure everything is okay.

I grew up with forty degree day Christmas. Shouts and laughter from the pool, the pop of tennis balls, as the champions on the Parnell/Heaslip families battle out ‘The Glenroy Cup’ which is akin to Wimbledon.

Christmas in Esperance are different. They are usually cool, it’s the splash of the waves as they roll into the beach and the smell of roasts cooking the webber.

1994 was the last time I had Christmas back at Glenroy (for regular readers of my blog, you’ll know that’s where I grew up) and this year, we’re heading back there! I can’t begin to tell you how excited I am. It’s all that has been on my Wish List for many years!

Children make Christmas, I reckon and my sister’s two littlies will be there as well as my two. Squeal! Thinking about it makes me want to jump up and down right now!

Anyway, my daughter’s Christmas list seems to contain most teenager things; iTune vouchers, clothes and so on. My son’s? Well he just wants a plane. ‘A real one, mum.’ Umm, maybe next year, darling.

What does Christmas hold for you and what’s on your list?