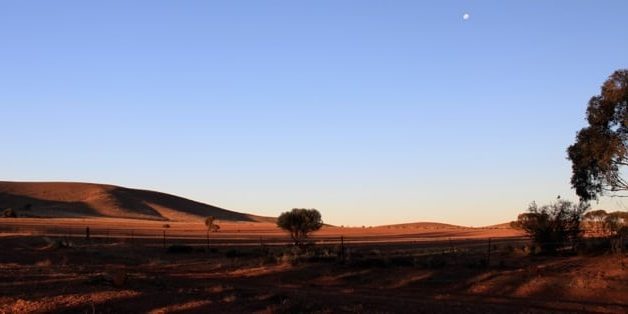 I think I’ve told you all many time, how much I love where I grew up in South Australia. Now I understand, people who live in ‘greener areas’ might get a bit freaked out when they see the country up here, but it is really special. Yeah, there are lots of stones, prickly bushes and so on, but there is fantastic feed and the stock know how to find it.

And yeah, it can be a bit hot in summer…

It’s been eighteen years since I was lucky enough to have Christmas surrounded by the country I love. Eighteen! When The Boss said he was working towards heading back there to spend the ‘big day’ with my family, I cried!

The drive is always the worst bit – I love the Nullarbor part – there is so much happening out there. It’s the Ceduna to Port Augusta bit I find hard. Maybe because we’ve had such a big day the day before and we’re so close but yet so far. The country is interesting, but I think I’m usually hankering to get there, that the seven hours ‘extra’ I have to drive just an inconvenience!

Crossing the Nullarbor we saw three dingos, wild goats, some brumbies and loads of kangaroos. The dingos were what caught my attention. I’ve come up close and personal with them often, from my time in The Territory, listened to them howl mournfully and watched as they’ve fossicked through our camps, looking for something to eat. They are an animal which fascinates me.

The Nullarbor is also where Silver Clouds is set, so it was great to do the drive and make sure my descriptions were on the money There are these signs which make you realise how far from any capital city you are. A car crash, heart attack or any sort of medical emergency is difficult to deal with, but made easier with the help of the Royal Flying Doctor. The road doubles as s strip and when it’s needed, the police block off the road until the plane lands, the patient loaded on and they’ve taken off again. this bit is exciting. Crossing the line to SA

We flew passed Border Village, the incredible coastline and made it to Ceduna in twelve hours! After a few drinks, good feed and an amazing sleep (we’d left at 3:30am WA time,) we were ready to hit the road and make it to Port Augusta, which we did, by about 1:30pm. Just in time for lunch. And all of us filled up on takeaway food, we don’t see in Esperance – Barnacle Bill’s and KFC! Please don’t judge us! Horrack’s Pass tells me I’m home. See that massive hill on the left of this picture? When we were kids, that was the ‘Sleeping Elephant Hill”. This road leads to home. So from ‘The Farm’ to Glenroy is 1,850km. We made it in time for afternoon tea and a swim.

And there was lots of catching up to do… A Christmas Tree to decorate, cricket to be played …and views to be gazed at.

Then the exciting bit started. For those of you who don’t know, my brother is a professional solo percussionist. Nick Parnell wields mallets and drums sticks like a magician and it was the drum kit that caught my youngest’s attention. After an impromptu lesson, there were performances to watch… You can see the concentration was intense! Rochelle had a turn, although she didn’t seem to have the same passion as Hayden!

Then we had the professional show us how it was done.

After all of that, it was time to head home again. 3,700km in four days for two days at my home. It was hard to leave and the drive was long, but by hell it was worth every kilometre we did.

So now you’ve heard about mine, what did you do?