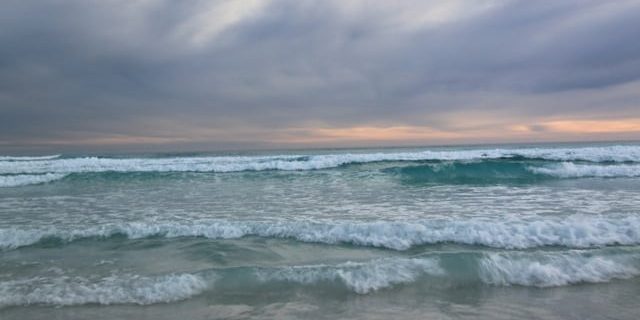 My husband (also known as ‘The Boss) is a mad keen fisherman. He will go to the beach when it’s raining, a howling southerly or when it’s a beautiful calm day. The only thing that stops him from getting a line in the water, is if there is ‘weed’ out in the holes he’s trying to fish in.

Apparently, ‘weed’ makes it too hard to pull the line in, or gives you ‘false’ bites.

As you can see from the top photo, the sea was an angry, stirred up piece of nature, last night. The waves were fairly dumping in to the shore. As the evening went on, the wind abated and it ended up so calm that the water looked like it had oil shimmering on it’s surface.

We were treated to a few of natures displays. Firstly there were a couple of whales, who made a brief appearance, to wave hello. (I wasn’t quick enough with the camera, for them.)

Then, as we were baiting up, Rochelle spotted something within the waves. On closer inspection, we realised it was a seal, hunting for it’s dinner. While the kids and I were oh-ing and ah-ing about it’s antics (again, moving far too quickly for me to get a photo), the boss was snarling because it would chasing all of ‘his’ fish away! But it didn’t, because just was we were about to pull the line in for the night and head home, there was a huge tug of the line, leaving the night lights bobbing like a float in the water! And in he pulled a Mulloway. A beautiful, silvery Mulloway.

Now, I’m not much into how beautiful fish are and I’m certainly not a Rx Hunt who seems to like to kiss them. And, being a ‘desert’ girl, I don’t like touching them much either. But this fish was impressive – 800cm long – even to me.

So, guess what we’re having for tea tonight? That’s right, fish and chips! Not so good for my ‘new me’, however, I’ve lost 2.2kg this week, so I guess one little slip up won’t hurt me!

Tell me, what did you see on your weekend that made you glad to be alive?