Beaching it and a wedding anniversary 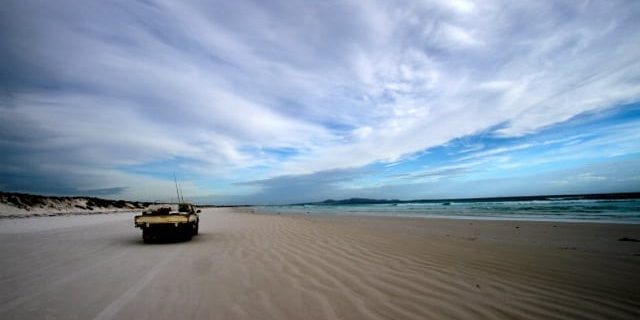 Hard to believe that so much has happened within that time. Especially when the wedding seems like only yesterday. Two kids, two or three farm bought and sold and bought again. And as with most families, there are few people missing from our family now, who were there on our big day.

But life is like that, it changes, it moves on and we can do nothing but ride its ebbs and flows. Our wedding was in Adelaide on a 46 degree day. I can still remember mum racing down to Harris Scarfs, the morning of the big day and buying them out of standing fans, so we could put them in the aisles of the church.

Thankfully, it wasn’t as hot as that, yesterday. It was pretty peaceful down at Thomas River. A good time for reflection, for being thankful. But a great time for family too. Rochelle had no idea I was taking photos – she wouldn’t have been smiling quite as broadly if she did! I want to wipe the sand off her face in this photo, but it’s on the mirror. Then of course, there is the wine to be sipped and the view to be ‘drunk in’. Two things I’m particularly good at. Beach Combing comes up with all sorts of amazing things, different shapes and sizes… …as you can tell by the looks on every one’s faces! But fishing is *just* as serious, if not more so. Especially for Boss. It’s his down time. Number one son is just reeling in the line for Dad, so he can get the bait re-organised. The sunset was very impressive with the soft peaches colour. Number one daughter spent most of her time prowling the shoreline for more shells and once it got dark, she donned a headlight and kept doing the same thing.

I must say we probably all looked a bit alien with four headlights shining out of the dark. The the clouds were spectacular. This one looks like a piece from the Great Barrier Reef, don’t you think?