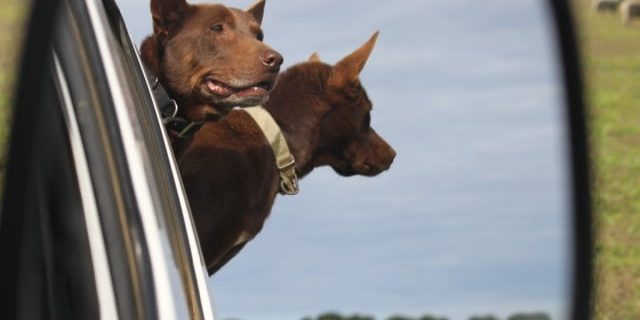 With The Boss on the boom-spray practically every day for the last two weeks, our working dogs, Weasel and Law have been hanging out with the kids and me. We’ve been checking out sunsets, heifers calving, watching the tractor go ’round in that ‘beautiful circle‘, Sara Storer sings of.

So really, they’re on an extended holiday of sleeping, eating and lazing around! I’m waiting for you to say ‘Go back!’

So when the call came over the two-way, for a mob of sheep to be mustered and the rams pulled out (yes, we have a mob of late lamb-ers) there was much excitement in the camp.

In fact, Law, who is usually the smoochiest, gentlest and quietest of dogs, was in the back of the ute and my mere whistle. Ears pricked, whining with anticipation at chasing those sheep around the paddock. He knew what was about to happen without me telling him. As you can see, the ears are pricked and it hard to contain them in the back of the ute! These are a few of the likely suspects, we were chasing – eighteen white suffolk rams had had their time as ‘studs’ and are now back to their life of celibacy until we put the to work, later in the year.

As for the doggies? Well, it doesn’t take long to become ‘work unfit’ so after the extended energy burst, they were pleased to be back lazing in the sun. They’d better make the most of it, because if the weather holds, we’ll be crutching next week!